The life of teal is a life on the wing. It is the smallest dabbling duck in the Boreal zone, but in terms of migration it covers huge distances from breeding waters to the non-breeding areas far, far away. The same bird can spend time in an oligotrophic lake in Russia during breeding, a brackish Baltic Sea lagoon or a tidal mudflat in the Atlantic coast during autumn, and a rich river delta in the Mediterranean in winter – and some individuals even straddle over into North Africa for a dabble. It takes a lot of adaptability to switch between such vastly different habitats, and at the same time avoid becoming dinner of arial predators and human hunters.

This book – The Teal by Matthieu Guillemain and Johan Elmberg published in 2014 – is part of a long tradition of monographs in ornithology, and a must for everyone with love for ducks. It’s clear from the writing that the authors hold their study species dear, and each part of the annual cycle is covered in well-written informative chapters.

Because of hunting, ducks have long been a focus of research and there’s a huge body of literature on many aspects of duck ecology. However, it is not easy accessible, either because it is old, or that it has been published in journals with a narrow scope. Here the authors have done a massive job to summarize tons of hard-to-get information in text, as well as tables and appendixes. Although most readers will not spend too much time on the appendixes, they serve as reference when you need it. For instance, if you want to know the helminth fauna detected in Teal, you can peruse appendix 8 – a full 7 pages of wormy stuff, or for a list of food items turn to appendix 6.

Although the book is written in the scientific tradition and heavily referenced, it is still a fairly easy read with clear chapter distinctions and a number of boxes for specific questions. You get to know both the Eurasian Teal and the North American sister species Green-winged Teal – which are extremely similar in apperance and ecology, but with rather different research history. The book devotes one chapter to distribution and numbers, one to  movements and migrations, one to foraging and diet and one to breeding ecology. From there the book turns to mortality, demography, harvesting and conservation, before ending in a list of priorities for future research.

The teal is facinating bird and The Teal is a very good book. When reading it, it struck me how much I have yet to learn even though I have studied ducks professionally for several years. My main study species is the mallard, which although bigger and not as migratory share many traits with the teal, and knowledge presented in this book is valuable for all dabbling ducks. My largest knowledge gaps was the breeding and foraging ecology parts, and I am grateful for filling those by reading the book. But there are so many other aspects of teals that are facinating, including the apperant ease of long-distance migration despite generally not putting on large food reserves, or the intricate pair forming and sex life of ducks – and the very large hunting bags and their impact on population demography and numbers.

Thus, this book fills two purposes: as a general read for anyone interested in ducks, and a specialized reference book for researchers. It was published in 2014 and if you haven’t bought it yet, you should. Especially, I think this book is an essential read if you’re into avian influenza, to widen the horizon of the ecology of one of the virus’ main hosts. An increased understanding on the life history of dabbling ducks would go a long way to clear some misunderstandings that the field is laden with. 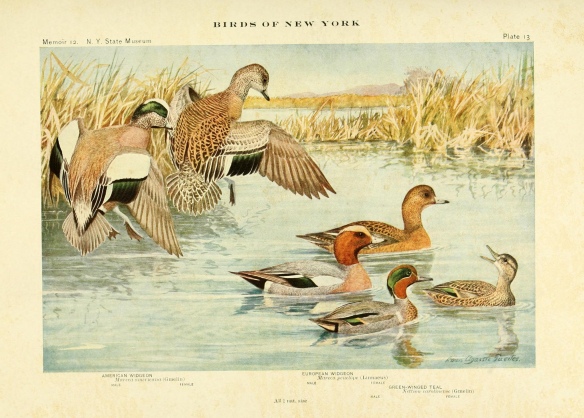 A pair of American Wigeons are about to land next to a pair of Eurasian Wigeons and mr and mrs Green-winged Teals.

A bitter pill? (Photo by Flickr user timsamoff under a CC BY-ND 2.0 licence)

As a species, we humans have radically changed our way of life in the last hundred years. Through modern medicine, better nutrition and improved hygiene we not only live longer, but also with less disease and pain. We are also becoming taller and fatter than our ancestors.

However, at the same time we see new ailments arising, like increased asthmatic problems, allergies, certain cancer types, and obesity, to name a few. And of course, the looming threat of resistant bacteria, or emergence of novel zoonotic pathogens is always there, just a monkey or a palm civet cat away. Plenty to do for future generation of physicians and microbiologists.

And for ecologists, too. Personally, I would go so far as saying that the merging of evolutionary theory and medicine is one of the most urgent needs for modern society. We need to understand that every treatment targeting microbes will be answered by an evolutionary response. Sometimes the response is rapid, as when a plasmid encoding antibiotic resistance is transferred between bacteria, and sometimes more slowly in changing pathogenicity or selection of increased virulence. The awareness is already here, at least theoretically, albeit not in function at the hospital floor (or in the food animal industry). 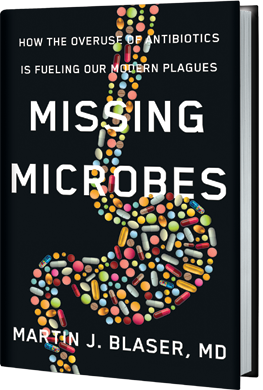 This summer I read a book with the title ‘Missing microbes – how the overuse of antibiotics is fueling our modern plagues‘. The author is Martin J. Blaser, a prominent scientist that has worked with pathogenic bacteria for decades. He is actually one of the founding fathers in Campylobacter and Helicobacter research.

It is a very interesting book, where Dr Blaser put his own research on bacteria in connection to the increasing incidence of modern diseases, such as obesity and asthma. It is not yet another book on antibiotic resistance. No, it is a book on what the consequences of reduced microbiological diversity imposed by antibiotics may have for our health.

The central tenet is that the widespread use of antibiotics (to treat infections, to produce food, etc.) is drastically altering our microbiome. If you are not familiar with the term microbiome, this means the whole assemblage of microbes that live and thrive in and on our bodies. The problem with antibiotics is that they hit rather bluntly. If the target is a pathogenic bacterium in your urinary tract, say an E. coli infection, the drug that is delivered to knock it out will also run rampage through your systems and kill a lot of more friendly by-standers. Collateral damage, in gangster terms.

The microbiome is entangled bank of microorganisms, a rainforest of bacteria and viruses. But it is not static; it changes in responses to our diet, exposure, hormonal levels, competition etc. Several of its constituents are doing good deeds for its host, for instance helping us degrading food items. Many have also been there for a very long time, evolutionary times. Plenty of time to develop symbiotic relationships.

Think of it, what is the first present your parents gave you? Was it a teddy bear? No, it was the microbiome of your mother, as you (a little fetus) were passing through the birth canal, and later when you started sucking on your mother’s breasts, and was kissed by your proud parents and relatives. These bacteria are the starting point of the next generation’s microbiome, inherited across generations from parents to offspring. Dr Blaser argues that we are interrupting these long-term evolutionary relationships between microbes and man. Caesarian cuts mean that the baby is not exposed to all of the microbiome of the birth canal, and frequent use of antibiotics over the course of a lifetime (and especially in the early months) come as sweeping scythes that may knock out certain species of the microbiome.

Some of these passengers may be good for us in ways we cannot phantom. One example Dr Blaser writes about is Helicobacter pylori. This bug has been perceived as a real bad guy. It lives in your stomach and may give you peptic ulcers and is associated with certain gut cancers. The response we have launched is to whack it out with a cocktail of antibiotics. Kill it, and you will be better off (for instance see this post). However, Dr Blaser has gradually come to a different view. In a series of experiments, his team and others have linked the absence of H. pylori to other sets of illness and disease, such as efflux and cancer in upper parts of the gastrointestinal tract. Maybe the bad guy isn’t all bad, maybe it is sometimes even beneficial? And is health really the absence of bacteria, maybe the presence of certain bacteria has the benefit of keeping the immune system primed?

He has also investigated the effects of antibiotic treatments on the microbiome in mice, and shown that treatment in a certain time period in early life affects not only which microbes that make up the microbiome, but also obesity status later in life. Thus, the microbes in our gut could affect our phenotype, all other things being equal (for a good resume of this see here).

I really recommend you to read his book – it is a fascinating story, written by an active researcher (which we tend to do too seldom). He launches some very interesting hypothesis that can be tested by laboratory and field studies. Read it and make your own interpretations.

If you enjoyed this post, or other posts on this blog, why not follow the blog via email, Feedly or get updates via Twitter by following @DrSnygg?